To share your memory on the wall of Pamela Putnam, sign in using one of the following options:

Born in North Adams and raised in Northampton, Pamela was one of three dau... Read More
Pamela J. Putnam (also known as Pam Lockhart), 71, longtime Shrewsbury resident, passed away peacefully on Saturday, January 2, 2021, in the comfort of her home.

Born in North Adams and raised in Northampton, Pamela was one of three daughters of Margaret (Crews) Putnam and the late James R. Putnam. She graduated from Northampton High School, Class of 1967. Pam began her career working for the Massachusetts Electric Company in Leeds. She moved east to Worcester County and held numerous jobs that allowed her to be present at home to care for her daughter, including working as the acting manager for the Holden Hills Country Club, and as a bookkeeper for the Worcester Pastoral Counseling Center, while continuing her education through local Worcester colleges. Eventually, she became the executive assistant to several prominent executives at Digital Equipment Corporation, where she became co-founder of the Gold-Key Club: a secretarial collaboration team which developed shortcuts and improved the functionality of early computer systems in the ‘80’s and early ‘90’s. She retired from Digital soon after it was absorbed by Intel, and continued working part-time as an executive assistant for local businesses.

In her free time, Pam enjoyed needlework, crafting, gardening, and feeding/watching the birds that visited her. She liked watching Hallmark Christmas movies year-round, and recently, she discovered the joys and hazards of binge-watching Netflix TV series. Pam was also an avid reader.

Pamela was predeceased by her beloved life partner, the late David G. Massad, Sr., and her sister, the late Margaret (Putnam) Ortolani.

Along with her mother, Margaret, of Sandy Springs, GA, she is survived by her loving daughter, Sharon E. Lockhart-Rowe, of Adams, MA; her grandchildren: Jonathan E. Rowe, Ellen Margaret (Rowe) Cunningham, and David James Rowe, all of Adams, MA; her sister, Paige (Putnam) Pillsbury, of Sandy Springs, GA; as well as several nieces and nephews, and their children. Pam also leaves several friends, who provided such love and assistance to her that they became like family.

We imagine her now, standing tall and strong, seeing, hearing, and breathing, and loved more now than we can possibly imagine in the presence of our Lord.

We invite friends that knew Pam to share their memories of her by completing the following Google form online: https://forms.gle/mLvN2xEM9dSPxwJX7. Services will be held at a later date, when it’s safe to gather.
Read Less

Receive notifications about information and event scheduling for Pamela

Print
Services for Pam will be held at a later date.

We encourage you to share your most beloved memories of Pamela here, so that the family and other loved ones can always see it. You can upload cherished photographs, or share your favorite stories, and can even comment on those shared by others.

Posted Jan 13, 2021 at 01:08am
Pam was such a delightful friend. We shared many fun times together over the years. I admired how gutsy she was facing her vision loss. She would take the train alone to Boston to meet her other low vision friends at South Station. I will miss her warm smile and her nice laugh. My sincere condolences to Sharon, Jonathan, Ellen and David
Comment Share
Share via:
KO

Posted Jan 10, 2021 at 12:12pm
I'm sorry to learn of the passing of Pam. I worked with her at Digital Equipment Corp. and she was a delight. She was competent, helpful and irreverent. I (and others) looked forward to her Monday morning stories of her weekend adventures: the restaurant that served fried spaghetti; a restaurant where she had a good meal but what she got seconds of was mashed potatoes; flying to Nantucket for the day! And the morning she was late to work because she locked herself out of her apartment wearing only a slip. She was a pleasure to be around. I hope her family & friends recall many happy memories of Pam to ease your pain of losing her. My sympathies to you all.
Comment Share
Share via:
DC

John and I are very sorry to hear of Pam’s passing. We enjoyed so many good times together in New Smyrna Beach and on our Sunday flights. She was always smiling and such a pleasure to be with. Our sincere condolences to her family. We hope that you will find comfort in the wonderful memories that she left behind. 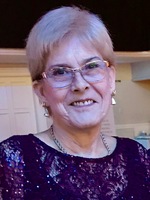