To share your memory on the wall of Josephine Harger, sign in using one of the following options:

Fina leaves her loving daughters: Sharon L. Ricciardi and her husband James, of Boylston, and Sandra L. Harger, of Concord, NH; her wonderful grandchildren: Gena Ricciardi and her wife, Bailey Andrews, James Ricciardi and his partner, Tori Fratantonio, and Lauren Ricciardi and her fiancé, Aaron Blanchard; many nieces, nephews, and close family friends, including Jackie and Joseph Buonopane, of Sharon. Along with her husband and parents, the late Joseph and Mary (Bommarito) Catanzaro, she was predeceased by her eight older siblings: Jasper, Frank, Bernard, James, Mary, Constance, Jenny, and Katherine.

Born and educated in Rome, New York, Fina was a graduate of Rome Free Academy, before moving east to Massachusetts. She married Bob, the love of her life, on August 13, 1955, after he passed a note to her at a coffee shop ten months prior. The pair settled in Chelmsford and then Tyngsborough, creating a wonderful life and home. Fina held various positions at local businesses, first as Head Teller of Commerce Bank in Chelmsford, then as a travel agent, and lastly, in Accounts Payable at Vesper Country Club in Tyngsborough. She and Bob enjoyed the Elks dances, many international trips, Cape Cod and Florida vacations, and living in Japan for a couple of years.

Above all else, being a warm and loving homemaker for Fina’s children and their children was her most prized position. “Nana” always loved being an integral part of her grandchildren’s lives; she was their biggest fan and followed their academics and sports faithfully. Fina was a talented painter and crafter, famous for jams and preserves, and cooking meals for friends and family. She had great style both externally and internally and knew who she was and how she saw the world. She had grace and class. She will be deeply missed, but never forgotten – her legacy of love lives on.

Services will be held privately for Fina’s immediate family, and she will be laid to rest with her beloved Bob in Pine Grove Cemetery, Boylston. The Britton-Shrewsbury Funeral Home, 648 Main Street, Shrewsbury, is honored to be assisting with arrangements.
Read Less

Receive notifications about information and event scheduling for Josephine

Print
Services will be held privately for the Harger family.

Consider providing a gift of comfort for the family of Josephine Harger by sending flowers.

We encourage you to share your most beloved memories of Josephine here, so that the family and other loved ones can always see it. You can upload cherished photographs, or share your favorite stories, and can even comment on those shared by others. 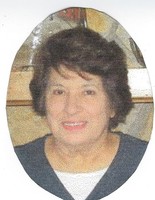