To share your memory on the wall of Brenda Ljunggren, sign in using one of the following options:

Brenda loved living in Shrewsbury and was very involved with her town. She was a poll worker from 1979 to 2000, has been a Town Registrar of Voters since 2000, a Town Meeting Member since 1988 and was a member of the Shrewsbury Republican Town Committee for more than 30 years. Brenda also worked as a Staff Administrative Aid at the Shrewsbury High School and was a Sales Representative for the Town of Shrewsbury Cable.

Brenda’s greatest joy was spending time with her grandchildren, especially summers at Cape Cod and boat rides on Lake Quinsigamond.

Brenda leaves behind her son Robert C Ljunggren, Jr and his wife Lynn of Shrewsbury, MA, son James D. Ljunggren and his wife Stephanie of Auburn, MA and her five grandchildren Jesse, David, Ashley, Samantha, and Hannah and several nieces and nephews.

Calling hours will be on Wednesday, 17 February from 5PM-7PM. Funeral services and burial will be held privately for the Ljunggren family. The Britton-Shrewsbury Funeral Home, 648 Main Street, Shrewsbury is honored to be assisting with the arrangements.

In lieu of flowers, donations can be made to the Shrewsbury Fire and Police association, PO Box 53, Shrewsbury, MA 01545.
Read Less

Receive notifications about information and event scheduling for Brenda

Consider providing a gift of comfort for the family of Brenda Ljunggren by sending flowers.

We encourage you to share your most beloved memories of Brenda here, so that the family and other loved ones can always see it. You can upload cherished photographs, or share your favorite stories, and can even comment on those shared by others.

Posted Feb 15, 2021 at 07:29pm
Our thoughts and prayers are with you Bobby, Jimmy and families. June and I shared a lot of memories with Brenda and Bob. Will miss her deeply.
Comment Share
Share via:

Posted Feb 15, 2021 at 06:15pm
We are all so heartbroken to hear of Brenda's passing. "The Cape" will be forever different.
We wish all of you blessings of healing and a sense of peace knowing she and Red are together again.
Our deepest sympathy.
Brad & Jill, Lindsay, Joey and Ava Hathorn
Comment Share
Share via:
JF

Posted Feb 15, 2021 at 06:12pm
David, Jeff here from Corsair, Brian(Shadows Fall father )My deepest condolences to you and the family. Audrius and I had many good laughs and fun times with Brenda. She was a delightful person and summer friend.
Comment Share
Share via:
L

Posted Feb 15, 2021 at 01:11am
To Bobby and Lynn and the rest of the Ljunggren on the passing of Brenda, your mother, grandmother. My deepest sympathy and will keep you in my prayers.
Comment Share
Share via: 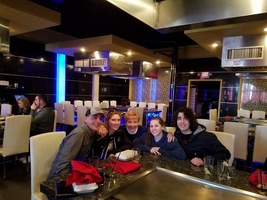