To share your memory on the wall of John Morrissey, sign in using one of the following options:

Jack was one of eight children born in Worcester, son of Irish immigrants Michael and Julia (O’Donoghue) Morrissey. He graduated from Sacred Heart Academy, Worcester Junior College, and proudly served his country in the U.S. Army. Jack married the love of his life, Jean A. (Doyle) Morrissey, on November 7, 1964, and settled in Shrewsbury to raise their family. He worked at Smith Valve for over 20 years, Nichols and Stone, and later retired after working for the Town of Shrewsbury.

Growing up on Cambridge Street in Worcester, Jack had a passion for Holy Cross football and all things Boston sports, especially the Red Sox. He was proud of his heritage, loved traditional Irish music, and enjoyed visiting Ireland when he could. Jack was a devout Catholic and a faithful member of St. Mary’s Parish in Shrewsbury. He spent his free time working in the yard and enjoyed gardening with his wife. Above all else, he cherished spending time with his family, and especially, his four grandchildren.

In lieu of flowers, memorial donations may be made to the Massachusetts chapter of Alzheimer’s Association, 309 Waverly Oaks Road, Waltham, MA, 02452 (www.alz.org/manh), or the Saint John’s Food for the Poor Program, 20 Temple Street, Worcester, MA 01604 (www.stjohnsfoodforthepoor.org). The Morrissey family would like to thank the Jewish Healthcare Hospice staff for their exceptional care and compassion for Jack in his last days. Due to the pandemic, there will be a private funeral Mass on St. Patrick’s Day, Wednesday, March 17, 2021 at St. Mary’s Church in Shrewsbury, followed by a private burial at the Mountain View Cemetery.
Read Less

Receive notifications about information and event scheduling for John

Consider providing a gift of comfort for the family of John Morrissey by sending flowers.

We encourage you to share your most beloved memories of John here, so that the family and other loved ones can always see it. You can upload cherished photographs, or share your favorite stories, and can even comment on those shared by others.

Posted Mar 17, 2021 at 01:27pm
I am so, so sorry and sending my love and sympathy to all of you. Moey, your Dad was a very special man who adored you all. You now have a very special angel to watch over you and protect you. I will keep you all in my thoughts and prayers. xoxo
Comment Share
Share via:
MD

Posted Mar 17, 2021 at 10:11am
Jean and family, You are in my thoughts and prayers at this time. Sending a hug to you Jean.
Marlene Davis
Schwenksville, Pa.
Comment Share
Share via:
DF

Posted Mar 16, 2021 at 08:27pm
My condolences to the Morrissey family. I remember Jack and all of you. Like him I went to Sacred Heart and Worcester Junior (Jack was attending at the same time). I recall his father and mother, who my dad a fellow immigrant, loved to talk to over the Earle Street fence. Long and far away but still close. My best to all of you.

Posted Mar 16, 2021 at 12:47pm
Morrissey Family, So sorry for your loss. My late husband Ralph Mancini new Jack and was best friends with his brother Joe. In fact Joe and Ralph graduated together from Holy Cross and Joe was in our wedding party. Knowing how hard it is to lose a husband, father,
grandfather and sibling I am sending all of you prayers and hugs.
Nancy Mancini
Comment Share
Share via:
SD

Posted Mar 16, 2021 at 04:35am
My deepest condolences for your loss. Maureen, your dad surely will continue to watch over you. Both your mother and father always extended such warmth and welcoming arms to everyone. I am lucky to be among the one's whom have encountered Mr. Morrissey's charm, wit and ability to make you feel like things are going to be fine as a fiddle.
Much love to you and your family,
Stacey Dowd
Comment Share
Share via: 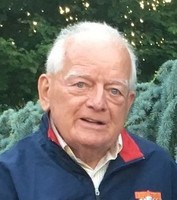