To share your memory on the wall of David Stevens, sign in using one of the following options:

Print
David B. Stevens, 83, longtime resident of Boylston, passed away peacefully yet unexpectedly on Monday, February 1, 2021 at UMass Memorial Hospital.

Born, raised, and educated in Worcester, David was a graduate of South High School, prior to beginning his college career. He graduated from New England School of Accounting and Clark University Evening Division with a BSBA in Accounting. David held several notable positions for local companies, especially his career as Vice President at Northern Mortgage Company in Boylston, from 1981 to 1995, then becoming President of Mortgage Training Solutions, from which he retired in 2002.

David formerly belonged to the Retired Men’s Club of Greendale and more recently a member of the Worcester Fish Club. Keeping busy after retirement, he founded Seniors on the Go, a travel club for retirees like himself, and became a consultant for Collette Travel out of Pawtucket RI. He also conducted computer training classes for Shrewsbury Senior Center for several years. Anyone who knew Dave realized how much he loved gardening, card playing, his beloved fish pond and his many indoor aquariums.

Relatives and friends are invited to David’s funeral Mass, which will be celebrated at 11:00 AM on Monday, February 8, 2021 at St. Mary of the Hills Church, 630 Cross Street, Boylston. Masks and social distancing measures will be required. Entombment will be held privately at Notre Dame Mausoleum in Worcester. The Britton-Shrewsbury Funeral Home is honored to be assisting with arrangements.
Read Less

Consider providing a gift of comfort for the family of David Stevens by sending flowers.

Posted Feb 19, 2021 at 12:46pm
Reggie, it has been years since I worked with you and Dave but my memories of the best employers has never waivered. I loved working at the mortgage company under your direction. Your generosity and love will always be in my heart. So very sorry for your loss. You snd Dave renewed my faith in marriage. My best to you and yours.
Comment Share
Share via:
PD

Posted Feb 09, 2021 at 03:04pm
Our deepest sympathy to Reggie and family.Such a huge loss to all who knew him! It was such an honor to be the person who brought them together! A perfect couple with a marriage made in heaven! Prayers are with all the family and please cherish all the great memories that enriched our lives! What a place he has in Heaven.. Love,..Peter and Midge.
Comment Share
Share via:
M

Posted Feb 07, 2021 at 06:25pm
Reggie & Family , I was so saddened to hear of Dave’s passing we all have such special memories of all the years we were neighbors.
we have over the years talked about the day Dave helped us set up the New Swing Set for the Children.
he was so agile he could fit into the little tent on the top.
Your love was always so
evident to all that were around you.
I personally know how hard this will be for you and your Amazing Family.
I am sending hugs and Love to all of you.
Maureen & Family
Comment Share
Share via:
DB

Posted Feb 06, 2021 at 12:40pm
Reggie and family,
I am truly heartbroken to hear of Dave’s sudden passing. Dave was such a kind and caring person; a beautiful soul, and he will be greatly missed. There is definitely one more angel above us. Sending my love, thoughts and prayers during this difficult time.
Love, Doris Blais
Comment Share
Share via:
DL

Dear Reggie: I was so sorry to read of Dave's passing. Dave was such a kind and caring man and I will never forget all the fun times that he planned with the trips from Seniors on the go and the many card games. Sincerely, Doris Lindberg, Holden
Comment Share
Share via: 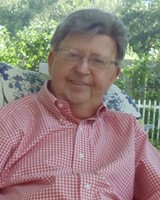